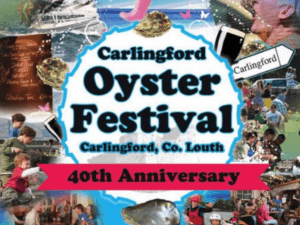 Nature has created the ideal location to grow oysters right on our doorstep in Carlingford Lough and Carlingford Oyster Company, family-run business has been farming oysters in the clean grade ‘A’ classification waters of Carlingford Lough since 1974.

How It All Began

On a misty morning in the late 1960’s Peter Louët Feisser sailed into Carlingford Lough on a wooden yacht, built with his own hands, accompanied by his wife Anna and two chickens. He was enchanted by the Loughs natural beauty and seduced by the allure of the Irish way of life.

Always attracted by the sea, he was inspired in 1974 to begin growing oysters after hearing a broadcast on BBC radio 4. Now in his 80’s Peter can still be found early in the morning out on the oyster farm at low tide perfecting new growing techniques devised to create the ultimate Carlingford Oyster.

Oyster farming offers a unique quality of life governed by the cyclical rhythm of natures seasons and tides. The next generation are now following in the footsteps of Peter, with his son Kian and wife Mary building on that romantic notion from 1974.

All of our customers will be familiar with the friendly voice of Peter’s youngest daughter Charm who manages our sales department and during the holidays Peter’s grand children will be found helping out around the farm learning the family business and earning some pocket money.

How Do You Eat Yours? 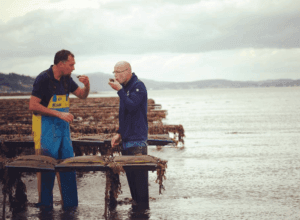 The famous question, baked or raw? Well, we have two recipes below for your tastebuds… 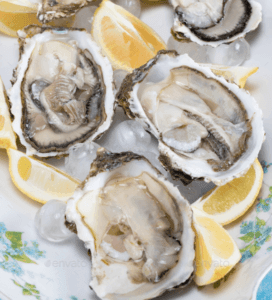 Method:
1. Scrub the oysters under cold water with a stiff brush to remove the dirt, especially in the hinge area where mud has a tendency to get trapped.

2. Find a durable thick cloth and fold it over several times to create a square; this will steady the oysters as you shuck them and also protect your hand.

3. Using the towel as a mitt, place the oyster, cup-side down in the palm of your towel-covered hand with the hinge facing you; have a small bowl handy to catch the delicious juice. Insert the tip of an oyster knife or dull butter knife as far into the hinge as it will go; don’t jab it in there or you could break the shell.

4. With gentle force, twist the knife back and forth to pry the shell open.

5. Using the knife, cut the muscle away from the top shell, bend the shell back, and discard it.

6. Run the knife underneath the oyster to detach it completely, but leave it in its shell.

7. Tip out the briny liquor into the bowl and pour it back over the shucked oysters. Nestle the oysters in a bed of crushed ice or rock salt to keep them steady. Spoon the cucumber mignonette on top and serve as part of a raw shellfish bar.

8. In a small bowl, combine the rice wine vinegar, shallots, ginger, cucumber, black pepper, and cilantro; mixing with a fork. Cover and chill for at least 1 hour or up to the day before you plan to serve, to allow the flavors to come together. Serve with raw oysters and clams.

Yield: 1 cup
To eat a raw oyster you will need to do the following:
1. Pick up one of the oysters by the shell.
2. Use the cocktail fork that comes with your order to detach the oyster from its shell.
3. When you are sure the oyster is no longer attached to the shell, put the edge of the shell against your bottom lip.
4. Slurp the oyster into your mouth.

A few questions you might have:
Should I swallow the oyster or chew it? You should chew it! How else will you know what it tastes like?
Should I use any type of seasoning? Some people like to put seasoning on their oysters before eating them. Popular choices include cocktail sauce, Tabasco sauce, and lemon juice. 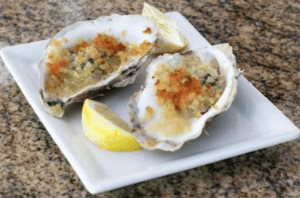 These delicious oysters are baked with butter, cheese, garlic and pepper.

Instructions:
How to cook Baked Oysters

1. Open oysters. Clean the part with the meat and discard the other shell.

2. Top each shell with cheese, garlic, and butter then sprinkle with a dash of pepper.

4. Serve immediately with a slice of lemon.

If cooking and prepping isn’t for you then there are a few establishments in Carlingford and on the Oyster Festival weekend, they will be available all over the village. 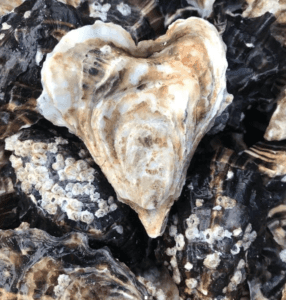 Just for a little fun, we have found 10 interesting facts about Oysters, these are definitely worth a read!

All the Things to Do

Build Your Own Package